Boise To Bukaku is inspired and established by Fidel Nshombo.

Fidel arrived in Boise, Idaho as a refugee escaping the war-torn Congo, determined to help those vulnerable communities he left behind. He was born in Bukavu but escaped civil war in 1998 at the age of 12. His quest took him through seven African countries in a continuous search for safety, suffering privations and barely surviving some of Africa’s meanest streets, including the Tongogara Refugee Camp in Zimbabwe.

From Uvira in the Congo, Fidel traveled through Burundi, Tanzania, and Zambia to Zimbabwe where he lived for 2 years. From there, he traveled to Botswana, spending a year in a refugee camp, before traveling to South Africa. After 3 years, he headed back to Zimbabwe where the UN secured his relocation as a refugee to the United States of America at age 22. This happened in 2006, after 8 homeless years.

Following his arrival in the US, he met his future wife, a Minnesota resident, in Iowa City and they subsequently set up home in Boise in July 2006 with their lovely daughters Joyce, Jocelyne, Jeannette, Jolie Ange, and Joana. Fidel’s integration into the USA was helped by his fluency in English, which he learned in Zimbabwe. He became a US citizen in 2011. 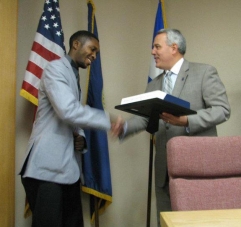 In 2011, Fidel was honored for his human rights work and for becoming a US citizen by Boise City Mayor, David Bieter, who presented him with a flag flown over the Boise Capitol building. He currently sits on the Mayor’s Refugee Steering group while traveling across Idaho and the US sharing his story to inspire people and bring awareness about refugee resettlement. Additionally, Fidel is a vice chair of the UN Refugee Congress, a nationwide advocacy agency for immigrants, where he also serves as a refugee youth mentor.

Other accolades include keynote speaker at the inauguration of the Idaho Human Rights Education Center Book Club; receiving the Idaho Refugee Integration and Success Award from the Idaho Office for Refugees; presenter at the Refugees in the Heartland Conference in Iowa and at the Martin Luther King Day celebration at the Idaho Capitol Rotunda; and presented with the Boise Police department at the NACOLE Conference in Utah promoting the new Police Refugee Liaison Officer position in 2013, a model that has improved the interaction between refugees and Law Enforcement in Idaho.

Fidel was thrilled when in 2015, his parents arrived to live in Canada. Fidel still has an older sister living in Bukavu, another in Kisingani, and his wife’s family lives in Goma.

Currently, Fidel works as an auditor at night and motivational speaker during the day. He knows first-hand the challenges of adapting to life in a new country and culture. Fidel is a poet and author of two books (Route to Peace and Route to Peace 2) and is working on his autobiography. He has also released two video documentaries that are used in conferences across the country to spread awareness of refugees in the US. You may follow Fidel’s life and work on the Blog, or by subscribing to his YouTube channel.